The Pillars of State

President of the Republic

The President is elected on the basis of direct universal and equal suffrage by secret ballot for a term of five years. No one can serve more than two terms as President of the Republic.

The President of the Republic calls elections for the Parliament, calls referenda, gives the mandate to form the Government to the person who enjoys the confidence of the majority of the members of Parliament, grants pardons, confers decorations and other awards, and performs other duties specified by the Constitution. In co-operation with the Government, the President also takes part in the formulation and implementation of foreign policy, decides on the establishment of diplomatic missions and the appointment and recalling of the heads of diplomatic missions of the Republic of Croatia abroad, gives credentials and receives credentials from the heads of foreign diplomatic missions.

The President is the Supreme Commander of the armed forces, appoints and relieves of duty military commanders, declares war and piece on the basis of the decision of the Croatian Parliament, in accordance with the law. During a state of war the President may issue Regulations which have the force of law. The President of the Republic and the Government collaborate in giving direction to the security services. The President of the Republic and the Prime Minister co-sign the decisions on appointments of the heads of the security services, after obtaining the opinion of the competent Parliament Committee. Under precisely defined circumstances, the President may dissolve the Parliament if the Government does not pass a vote of confidence, or if the State Budget is not adopted within three months from the date it was proposed. The President of the Republic is Zoran Milanović, elected in January 2020.

The fourth President was Kolinda Grabar-Kitarović, who served one term (2015-2020).

The Government of the Republic of Croatia exercises executive powers in conformity with the Constitution and the law. Its competencies, internal organisation and procedures are defined by the Act on the Government and by the Rules of Procedure.

The Government proposes legislation and other legal acts to the Parliament, proposes the state budget and annual accounts, implements laws and other decisions of the Parliament. Within the scope of its powers, the Government also passes Regulations to implement laws, it appoints and relieves of duty appointed officials in the state administration. The Government conducts the foreign and domestic policies, adopts strategies of economic and social development, directs and supervises the work of the state administration and performs other duties according to the Constitution and the law. The Prime Minister is Andrej Plenković.

The government in the Republic of Croatia is organized on the principle of separation of powers into legislative, executive and judicial branches.

Judicial power is exercised by the courts. The judiciary is autonomous and independent. The courts administer justice according to the Constitution and law, as well as according to international agreements and treaties in force.

Judges and lay assessors participate in the administration of justice in conformity with the law.

The Supreme Court of the Republic of Croatia, as a highest court, ensures the uniform application of laws and equal justice to all. The President of the Supreme Court is elected and relieved of duty by the Croatian Parliament at the proposal of the President of the Republic, with a prior opinion of the General Session of the Supreme Court and of the authorized Committee of the Croatian Parliament. The establishment, jurisdiction, composition and organization of courts, as well as court proceedings are regulated by law.

Judicial office is permanent, but exceptionally, at assuming the judicial office for the first time, judges are appointed for a five-year term. After the renewal of the appointment, judges assume their duty as permanent.

A judge shall be relieved of judicial office:

Judges enjoy immunity in accordance with the law. When taking part in administration of justice judges and lay assessors may not be called to account for an opinion or a vote given in the process of judicial decision making, except if there exists violation of law on the part of a judge.

The functions of the State’s Attorney’s Office and the judiciary are thus separate. At the request of the State’s Attorney an investigation is carried out by investigative judges. Investigation is regulated as part of criminal proceedings by the rules which are part of the Criminal Procedure Act. The guarantee of independence of the investigative judges is equal to the guarantees for any other judge in the Republic of Croatia, which have already been mentioned in this material. 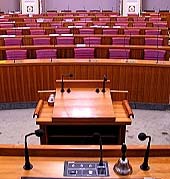 The Croatian Parliament (Sabor) is a representative body of citizens, vested with legislative power.

According to the Constitution, Croatia has a one-chamber Parliament of no less than 100 and no more than 160 members, elected on the basis of direct universal and equal suffrage by a secret ballot.  Members of Parliament are elected for a four-year mandate: their mandate is not binding and they enjoy immunity. Currently there are eight representatives of national minorities, elected in one polling precinct representing the whole territory of Croatia. The Diaspora is also entitled to electing representatives in a special "constituency": a "non-fixed quota" should be applied, which means that the number of representatives will depend on the turnout of diaspora voters.

The Parliament regularly sits twice a year: between January 15 and July 15, and between September 15 and December 15. Extraordinary sessions may be called at the request of the President of the Republic, the Prime Minister or a majority of representatives. The sessions of the Parliament are public. The structure and the work of the Croatian Parliament are regulated by the Rules of Procedure, which are passed by the majority vote of all deputies.

The structure of the Parliament

Besides plenary sessions the work of the Parliament is also carried out by its working bodies (established in accordance with the Rules of Procedure). The working bodies are its committees and commissions. Additionally, the Parliament may form commissions of inquiry regarding any issue of public interest. The chairperson of the inquiry commission is appointed by the majority of representatives from among the ranks of opposition representatives.

As a rule the composition of the working bodies corresponds to the party composition of the Parliament. A working body may only adopt a position on a matter within its competence if a majority of all members are present, and decisions are taken by a majority vote of all the members present. The sessions of parliamentary working bodies must be attended by a member of Government (or by his/her deputy) when Government proposals or positions are considered or by heads of state administration bodies when matters from within their competence are considered. Parliamentary working bodies may invite scholars, professionals, public officials and other persons to sessions to obtain their views on matters being discussed. Scholars, professionals and public officials appointed to some parliamentary working bodies are entitled to all rights of the working body, with the exception of decision-making authority.

In order to facilitate the consideration of individual matters within its competence a working body may establish sub-committees (and its chairman may establish a special task force) which operate exclusively within the framework of the working body.