In the eastern, central and western part of Croatia there are black, brown, acidic (washed, surface wet soil), brown soil on the marrow (soil washed), wetland lowlands and river valleys and alluvial (overhead) soils of river flows.
Along the coastline several types of soils are present,brown and red soils on the limestone and dolomites mixed with rocks, deep red and brown soils on limestone, and highly skeletal soils (rocky), dinaric rocks and pasture lands.
The marshlands of the lowlands and river streams are connected with all river basins, so they are present (in smaller areas) all over Croatia. Under the influence of man, the so-called anthropogenic soil are formed.

Croatia is one of the few countries with a rich and diverse forest fund covering 37% of the total territory.
Mountainous Croatia has the highest percentage of forest on surface unit.
According to the basic vegetation types, most of the Croatian forests are white-wood forests or oaks (about 80% of all forests), the smaller part of them is coniferous (about 13% of all forests), while the smallest part is mixed forests (about 7% of all forests).
In the coastal Croatia there is a degraded forest cover, so it is the largest part of the area under the maize, gariga, shrubbery and rock.

Croatian flora counts a total of 4275 plant species and 1072 subspecies (according to the data from 2001).
According to the number of species per surface, Croatia takes third place in Europe, which indicates floristic wealth of our country.
About 6.5% of Croatian flora is endemic (346 taxa). The most famous Croatian endemic is certainly the Velebit dalmatian.

According to the Ordinance on collecting self-propagating plants for the purpose of processing, trade and other traffic (Ministry of Culture, NN 100/2004), 740 plant taxa are protected, while 541 are strictly protected. Thus, for example, the whole orchid family is protected by law, and many do not know that orchids fall among the 15 most representative plant families in Croatian flora, with as many as 172 taxa.

According to the statistics from the Statistical Yearbook 32 (2000), in the Ministry of Environmental Protection and Physical Planning, 8 special botanical reserves of 197.45 ha and 28 special forest vegetation reserves totaling 2.608,49 ha have been registered in the Register of Protected Areas of Nature. 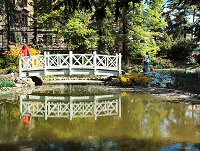 With only 4.7 hectares of total area, the Botanic Garden in Zagreb is one of the smallest in Europe. Last year, 2004, he turned 115, and he has about 5000 domestic and foreign plant taxa grown in it. Because of its great educational, cultural-historical, tourist value and great importance to the city of Zagreb and the Republic of Croatia, the Botanic Garden of the Faculty of Science was 1971 protected by the law as a monument of nature and culture (a monument to garden architecture).

Although many famous botanists (Visiani, Degen, Rossi et al.) were operating on the territory of Croatia, only a few years ago, more precisely in 2002, the Croatian Botanical Society (HBoD) was founded, which today brings together 80 members.