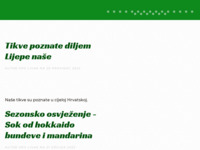 OPG Livak is located in Kutjevo on an area of ​​5600 square meters, and it is a biotope consisting of three units; orchard, mountain lawn and forest. The first part is about an orchard containing old varieties of fruit trees, wild fruit trees and shrubs and trees of wild woody and shrubs whose fruits are used in the diet, such as hawthorn, black thorn, wild cherry, wild pear, plum thorns and pomegranate. In the second part, which consists of a meadow, a variety of herbaceous plants grow, among which there are a large number of medicinal species. In the forest, which is also the third part of the biotope, there are several species of trees and shrubs, the most prominent of which is oak malt. It mostly originated from a stump or root and grows rapidly in height and thickness. Along with oak, there is also an oak tree and together they form a community where the oak predominates. Oak sage and many other species have also been found, such as wild cherry, wild pear, common walnut, white mulberry, white poplar, black ash and more. In 2011, a floristic survey was conducted at OPG, which resulted in the finding of 174 wild plant species, of which 26 are protected by law and 2 are strictly protected by law (Dianthus armeria L. ssp. Armeria and Bromus commutatus Schrad.). Likewise, by observing the fauna, it was noted that, among others, the common frog, the toad frog, the green frog, the gatalinka, the blind, the white-tailed, the wild rabbit, the tree-frog, the vine-snail, the hedgehog, the mole, the field mouse, and several species of spiders and locusts. Production of natural herbal teas (mint, white hawthorn, thyme, gooseberry, yarrow, pomegranate ...) and natural liqueurs (white hawthorn, pomegranate, thorn ...) is also planned at OPG Livak. exclusively from wild species that thrive on this biota