Marin Držić, called Vidra, was born in Dubrovnik and is the most renowned Croatian Renaissance writer. He went to school in Italy and travelled, as a company to the then controversial world personality and adventurer Christoph Rogendorf, from Austria to Turkey. Few of his original works have been preserved, but the acknowledgments he has received from contemporaries, as well as the numerous performances of his comedies and drama, make him an indispensable writer in Croatian history.

Držić was born in a famous Dubrovnik-based commercial family which had experienced bankruptcy and Držić’s creativity and political action should be viewed through the prism of the impoverished member of the civilian class he belonged to. The common themes of his works are greed and stinginess as well as critique of wickedness and corruption. 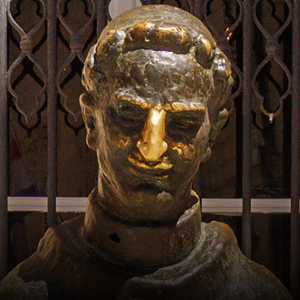 At the end of his life he was strikingly opposed to the Dubrovnik nobility and the then structure of the Dubrovnik Republic. He proposed, therefore, the organization of the Republic according to which the government should be divided between the nobility and the representatives of the common people, and protection should be provided by the family Medici. According to some interpretations, his nickname is Vidra (the Otter) - a cunning beast who prepares a plot for the Dubrovnik nobility.

His versatility and rebellious spirit led to a lively life he ran - there are records of punishment for performing comedies in forbidden places in Italy, physical attacks on him on the streets of Dubrovnik and plagiarism lawsuits against which the contemporaries were defending him.