Nikola IV Zrinski, better known as Nikola Šubić Zrinski, is an iconic figure of Croatian history. He is best known for his battles with the Turks, which at that time represented the main threat to Europe, and the heroic defeat of Szigetvár - the main defensive fort on the way to Pest and Vienna.  Nikola Zrinski is a famous descendant of a distinguished line of Croatian noblemen.

Zrinski’s family is related to the Hungarian nobility and even to the English royal family through marriage connections. He took part in the heroic struggles in which he defended both Vienna and Pest; when he was 21, he participated in the defence of Vienna. In the battle of Pest in 1542 he rescued the units of Ferdinand I. For his services he was appointed to be Ban of Croatia at the Assembly in Bratislava in 1563. He was honoured to carry a copy of the Holy Crown on the most important events and was among the ten most influential people of the Hungarian-Croatian Kingdom. 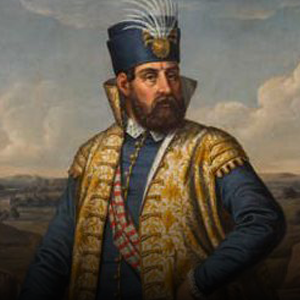 Sultan Suleiman I, known as the “Suleiman the Magnificent”, set off in 1566 with an army of more than 100,000 troops to Vienna. He stood in front of Szigetvár, defended by Zrinski and the siege lasted for a month. When the defeat of the heroic defenders was inevitable, Zrinski decided to die as a hero and commanded a break from the fortress, putting a hundred gold coins in the pocket as a reward for the Ottoman soldier who would cut off his head. Despite the fact that the Turks formally conquered Szigetvár, due to the great casualties and Sultan's death a few days before the breakup, the Turks withdrew. Many works have been written in honour of Nikola Šubić Zrinski, and the most famous among them is an opera carrying his name. In addition to the Croats, the Hungarians celebrate him as a national hero as well.