The aquatorium of the eastern coast of the Adriatic Sea from the Savudrija peninsula (north-west) to peninsula of Prevlaka (south-eastern) part belongs to the territory of the Republic of Croatia. This beautiful part of nature with 5790km coastline is one of the most indented coastlines in the world.

Almost all the islands of the eastern Adriatic coast and its central par are Croatian islandst, making Croatian islands the second largest aquatorium in the whole Mediterranean. There are 1.185 islands, divided into 718 islands, 389 rocks and 78 reefs. 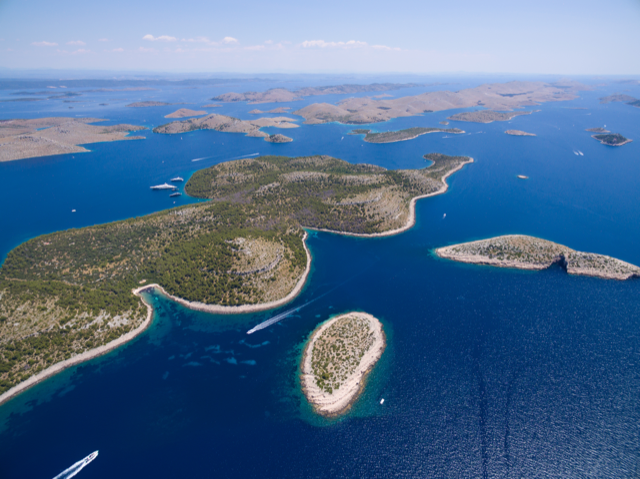 There are several scientific projects in the field of geography and social sciences that focused their research on small Croatian islands. According to them, in a group of small islands we can count all inhabited islands that have no more than three inhabited places. There are a total of 34 such islands, which can be classified into the following five geographic groups:

The listed islands have a total surface of 256 km2 and today there are about 4,500 people. One hundred years ago, there were about 20,000 people living on these islands, and the trend of declining population continued today.

Although the islands occupy about 3,300 km2, ie 5.8% of the Croatian land surface, they determine the territorial sea, which makes almost 37% of the total area of Croatia (without the territorial sea the island would be about two-thirds less). The largest is the island of Krk (410 km2), 77 are larger than 1 km2 and only twenty are larger than 20 km2. Due to the great indentedness, the coastline of the Croatian islands is longer than the coast of the mainland. From 5,835 km of Croatian seaside, 4,057 km (69,5%) relates to the coast of the islands.

Croatian coasts and islands lie in the Adriatic type of Mediterranean climate. The summers are hot and dry, winters mild and damp, and the insolation is great. Special climatic features, however, vary from island to island, depending on the environment, altitude or exposure to winds. The main factor of the island climate and plant cover is the Adriatic Sea, which belongs to the warm sea. The surface temperature usually does not drop below 10 ° C in winter nor exceeds 25 ° C in summer. With the exception of larger ports, the sea around the island is unpolluted, as is the whole Croatian part of the Adriatic.

Various peculiarities of the island ecosystems are noticed on the Croatian islands. It is dominated by Mediterranean evergreen vegetation, the degraded forest community of oak, consisting of various plants. On the islands there are also various rocky plants, plant communities consisting of grasses and fragrant herbs.

The Croatian islands' wild animals are predominantly small, including predatory species. Bird species are also very diverse. The most famous, but also the most endangered species, is the Eurasian griffon on Cres and Plavnik. The animal world is mostly autochthonous. On the uninhabited parts of islands, the ecosystem is distinguished by rabbits, harebirds, long-haired moths, and deer and muflon. Of domestic animals, naturally, sheep and goats are predominant.

The Croatian Underwater hides more than 85 registered diving destinations, which include the scenes of coral meadows, vertical underwater walls, marine caves and wrecks of warships.

However, areas forbidden for diving are:

Diving zones with special permission are: