In the territory of Croatia, many layers of prehistoric cultures are present, the formation and disappearance of which is tied to the migration of unidentified ethnic groups. The prehistoric Mediterranean groups in the coastal regions and the Pannonian groups in the continental areas developed Neolithic and Eneolithic cultures (Danilo, Hvar, Vučedol) and quite likely the first phases of culture of the Metal Age. They were connected to the Illyrians, the ethnic group with a clearly defined cultural and artistic physiognomy. In the period of their development, the first serious conflicts appeared with the ancient Greek world (the colonies of Issa, Faros, Tragurion) and later with the penetration to Rome, which ended with the inclusion of the entire region into the Roman Empire, despite the long resistance by the Illyrians. Dalmatia was made a special province, with its capital Salon. The Romans left lasting traces in the social and culture life of this region; they built roads and fortified centers and erected many towns with a numerous monumental structures. These towns, particularly in the coastal regions, remained the foundation for later urbanization in the Middle Ages (Poreč, Pula, Zadar, Salon-Split). The fall of the Roman Empire brought the cultural sphere of Byzantium to the southern regions of Croatia, and this new cultural influence was expressed with a series of monuments from Poreč (the Euphrasian Basilica) to Dubrovnik.

The oldest testimony of the construction activities in Croatia appeared after 800 AD, and is connected to the people’s acceptance of Christianity: these are churches of varying forms, with vaults and small cupolas, preserved in Nin, Omiš, Ston, Trogir (St. Barbara) and on the island of Krk. As stone-dressed ornamentation, braided ornaments began to richly develop between the 9th and 11th centuries. Weapons and jewelry (earrings, annulets) have been found in Old Croatian graves, first of Byzantine origin and later taking on the markings of domestic craftsmen. From the second half of the 11th century, the architectural style of the three nave Romanesque basilica with apses (cathedrals in Rab, Zadar, Trogir) appeared. The Franciscan cloister in Dubrovnik (14th century) bears Romanesque markings, while churches in the northern regions between the Sava and Drava Rivers (Belec, Glogovnica) saw later adaptations in the Gothic style. Sculpture of the Romanesque Period is represented by the wooden doors by A. Buvina in Split (1214) and the monumental Radovan gates of the Trogir Cathedral (1240) with its sculptures, narratives and allegorical reliefs and rich ornamentation. At the end of the 12th century, tombstones in Dalmatia (“stećak” – medieval standing tomb-stone, marble) appeared with robust and unconventional stone-dressed figures, with scenes of battle, hunt and dance. This coincided with the appearance of the Turks, while architecture and art began at this point to evolve separately in the northern and southern regions of Croatia: the north under central European influences, the south under Mediterranean, primarily Italian art. 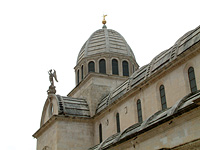 Gothic appeared in northern Croatia in the 13th century with the erection of the Zagreb Cathedral, which was adapted in the centuries which followed. In the sacristy, fragments of the murals from the end of the 13th century have been preserved. Gothic architecture retained its typical and simple elements until the 16th century (churches at Lepoglava, Remete, Samobor, Topusko, Glogovnici, Voćin). In Adriatic regions, Gothic appeared primarily in the form of single nave churches (Trogir, St. Dominic). At the end of the 15th century, the majority of the coastal regions were taken by Venice, and churches, palaces for city administration and princes, cloisters, loggias, clock towers and fountains influenced by the Venetian Gothic appeared: more than just structure and construction, the emphasis of decorative items came to the forefront in these structures. The master of the Gothic style was Juraj Dalmatinac (George of Dalmatia), builder of the Šibenik Cathedral, with his carved wreath of 74 heads of characteristic physiognomy in the cathedral’s apses. He also worked in Split (Chapel of St. Anastasius in the Cathedral), Dubrovnik, Zadar and Ancona, while Juraj’s followers spread the Venetian Gothic style throughout the whole of Dalmatia. The elements of Apulian Gothic reached Korcula, and were taken to Dubrovnik in the 15th century by Onofrio di Giordana de la Cava, builder of the old Rector’s Palace (1435) and the two fountains. The decorative elements of Gothic prevailed in the porticos of the Dominican cloister in Dubrovnik (1428) and in the triforms of the Cipiko palace in Trogir. In stone masonry, wood etchings developed, somewhat in free form, though more for the creation of sacral furniture (choir seats in the Trogir Cathedral, the work of I. Budislavic). There is an abundance of valuable gold works in church vaults. Wall mural monuments are particularly rich in Istria; with significant frescos found in churches in Pazin, Butoniga and Bermo (works of Antun from Padova, 16th century). The illumination reached its peak in the Glagolitic Missal of Duke Hrvoje, the work of a domestic master of the 15th century.

In the passage from the 15th to the 16th century, Renaissance forms in architecture and sculpture appeared in the Adriatic region. The prime representative of the move from the Gothic to the Renaissance style was A. Alesi (baptistery in the Trogir Cathedral). The sculptor I. Duknovic created two works for the Cathedral chapel, and he also worked in Rome and Budapest. The Sibenik Cathedral was completed by Nikola Firentinac (Nicholas of Florence); its façade became a model for the Church of the Holy Redeemer in Dubrovnik, St. Mary in Zadar and the Hvar Cathedral. In the spirit of Renaissance, palaces, arsenals and fortifications were built. The Dubrovnik architect P. Milicevic and the Andrijic artists from Korcula brought the Renaissance form, together with the late Gothic, to the Divona Palace of Dubrovnik. The Dubrovnik sculpture and type of altar polyptych represent the work of M. Juncic, V. Lovrina, M. Hamzic and the most outstanding artist among them, N. Bozidarovic. Many artists moved to Italy, where they could study and work. Among these “Schiavoni” are the painters J. Culinovic, A. Medulic, the miniaturist J. Klovic and the copperplater, Kolumic-Rota.

In the north of Croatia, Renaissance expression was more modest in the application of individual architectural elements. The Baroque was more emphasized, introduced by the Jesuits in the 17th century, giving their contribution to church architecture and interior design (St. Catherine in Zagreb; Varazdin). In this century, many Gothic structures received Baroque elements; internal ornamentation of churches, altars, pulpits. The exceptionally individualist creations of altar paintings include those of Zagreb master, B. Bobic. The Baroque dominated in the 18th century, when the feudal palaces were erected in the cities (Orsic-Rauch in Zagreb, Patacic and Draskovic in Varazdin), while castles and noble manors were built in the country-side (Bistra, Gornja and Donja Bedekovicina, Lobor, Miljana, Brezovica). The late Baroque was represented in church architecture in St. Ksaver in Zagreb, in Lepoglava, Purga near Lepoglava, Belec (St. Mary), Trški Vrh, Bedekovčina, Daruvar and other small structures, with more woodwork and stone work and illusionist-decorative wall paintings (I. Ranger). In the Adriatic region, the main monuments of Baroque architecture are seen in Dubrovnik (Cathedral, Church of St. Vlaho (St. Blais) and the Jesuit church). They were erected in the early 18th century as a variation of the Roman Jesuit, or rather, Venetian Baroque. The church forms and altar paintings were primarily supplied from Italian workshops. Among the domestic painters, T. Kokolje stood out in his individuality, while F. Benkovic worked exclusively outside his homeland, mostly in Italy, Austria and Germany.

Classicism of the first decade in the 19th century did not stand out in monumental form and extent. The needs of the bourgeois were satisfied by the intimacy and modesty of Biedermeier, especially in interiors and furniture. Thanks to B. Felbinger, Zagreb received a number of simple and harmonic middle class homes.

To the end of the century, architecture is subject to general currents of historicism, which foreign architects realized in Croatia in their project for public and private buildings. Resistance to the formula was expressed by V. Kovacic in his concepts of regulation and projects of buildings and interiors. His work was continued on by H. Ehrlich and E. Sen.

Special credit for the spread of abstract art is given to the appearance of the group ‘Exat 51’, founded by painters and architects in Zagreb in 1951. In the post-war period, this group strongly affirmed itself in naive art, which received international acclaim.

Architecture of the 1960s emphasized an air of ambience, the 70s were dominated by the forms of pluralism while the appearance of post-modernism in the late 1970s opened the period of dominance of the ‘incomplete structure’.